So I had a great day out last week back up to my favourite spot.  Not too remote but out of the way with no passers by.  I’ve been struggling to get out recently, work has been hectic and I’ve been across visiting my Dad who hasn’t been well recently.

Getting outdoors is in reality what I probably need most.  I got out just the once in January, as today praticing some basic bushcraft skills.  I feel far more relaxed afterwards and I get the exercise I need so much.  I’ve spoken before about the cathartic benefits so I’ll not go on about it but you get what I mean.

There had been a dusting of snow overnight, really nothing more and it had mostly melted on the roads.

The temp was about 2 deg C so not too bad.  The walk in was okay, I took my time going up the hill, my knee has started to play up again but it didn’t give me any bother.  En route I heard a few knocks from a woodpecker.  I’ve seen them only occasionally, a greater spotted woodpecker.  I caught sight of a red squirrel always a pleasure although he was quite shy.  On the way in I cut some willow for a basic simple knife use project.  One of the first things we did on my Woodlore Fundamental course was to make tent pegs.  Simple easy and fills a need.  When I’m putting a tarp up wire tent pegs just don’t cut it so a few heavier duty ones will solve the problem.

The need for tent pegs was coupled with a new knife from Rob Evans.

The knife is his variation on the Kephart knife with a Scandi grind and a green micarta handle.  It came with a really well made leather sheath again made by Rob.  Its a lovely knife really well made and Rob is a delight to deal with.  I would like a kydex sheath though to complement the man made handle.  It cuts like a dream, is robust and after playing with it whilst out it was still shaving sharp.  Rob also does some lovely Bushtools and I’m hoping he’ll make more this year and that I manage to get my hands on one.  I came across Rob on BCUK where his monniker is Robevs73.  I’m keen to try a few knifes using the basic skills I learnt at Woodlore to see which one suits me more.  I do see a certain amount of attractiveness in a strong well made and thought out knife.

I had a plan for my day out, I know it’s a geeky thing but I feel happier doing it.  The aims were to;

In amongst the trees there were some remnants of the snow but nothing significant.  As I approached my site I saw the white backside of a Roe deer bounding away.  This is a pretty large area and rather than exhaust one site repeatedly I’ve been changing sites each time.  Choosing a spot with suitable trees for my tarp I dropped my bag and started work on my tent pegs.  As I cut them the snow started to fall.  By the time I had my tarp out it was falling heavier.  I went for a basic simple ridgeline tent, still struggled with my taut line hitches but repitition will make it easier.  I did manage to tie my tension line hitches easily and in minutes I was up and had shelter.  By then my pack and Ribz were covered in snow.  I had foraged some sticks for firelighting on my way up in my homemade fold away pouch, that kept the sticks dry.  The snow was falling pretty heavily now, lying but it was wet and I knew it wouldn’t lie around for long. 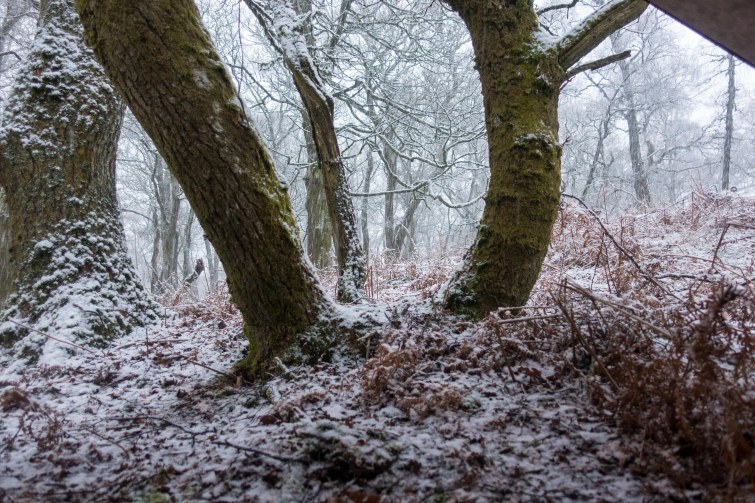 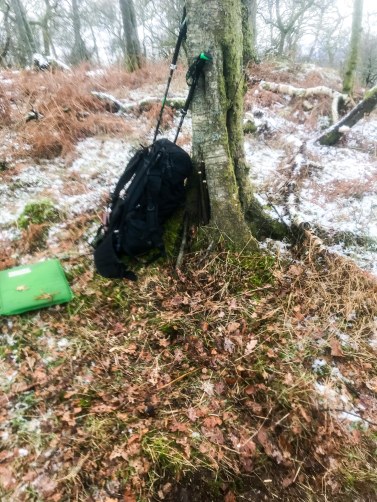 Even in the underside of the open

tarp it felt a few degrees warmer.  I put my zipped merino top on for added insulation.  I sorted out my collected wood and set about picking more up.  It’s suprising how much you need for an effective fire lay.   Of course most of what was lying on the ground was now covered in snow.   An inch had fallen and still coming in I had to knock the fallen branches and picked off the end twigs.  I got a good amount and sorted it all out under the tarp.  I put my hive stove together in shelter before clearing an area in the lee of a tree from the NW wind and snow.  Brushing the snow away and the fallen leaves the area was not necessarily the biggest but it was ample and as proved when I finished the wet cold ground only thawed out some more. 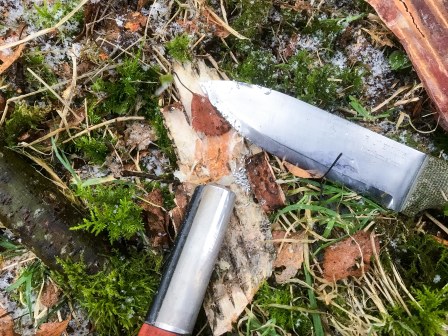 I had collected some beaver birch and set to work.  I was using a magnesium and firesteel spark stick.  It was made by a guy in the states.  It has a standard firesteel, a magnesium stick and the wooden handle which can be scraped to create more tinder.  A nice piece of kit which worked well.  I scraped some beaver birch with magnesium and handle scrapings made a nice little pile which ignited after a few sparks.  Rob’s Kephart was perfect for creating sparks.  I lit a birch bark still using that to light the bark amongst the fire.  I piled the twigs high with some larger pencil thick twigs on top with the fire warming and drying them before they lit in turn.  Voila fire.

Immediately a brew was on.

Why on earth would you light a fire and not make a brew?  With a larger pile of twigs than normal I laid my grill on top and my mug on top expecting it to settle nicely in place.  It did not!  Mug was refilled, I kicked my own ass and brew attempt 2 was on.  I had gone back to condensed milk for a change up and the sweetness was welcome in the cold weather.  I had left home early in the morning so I had brought my diet breakfast cake in addition to my usual lunch.  It’s simple, easy to make, tasty and adaptable.  For the fullness of disclosure the Kephart cut it well, we’d all be rather upset if it didn’t!  I sat under the tarp as I ate my cake with the snow slithering off the tarp and creating long piles underneath the edges.  It was a calm and soothing noise as the wind blew more snow around and about.  The last time I had been up this way in Jan I had found a moth on my pack as I prepared to go.  Alas my species knowledge is poor, if you know what it is leave a comment. 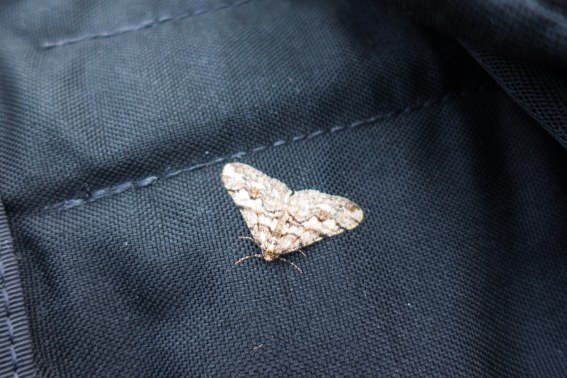 I had a plan to try to dig a gypsy well down the hill a bit but was less inclined with the snow covered and semi-frozen ground. 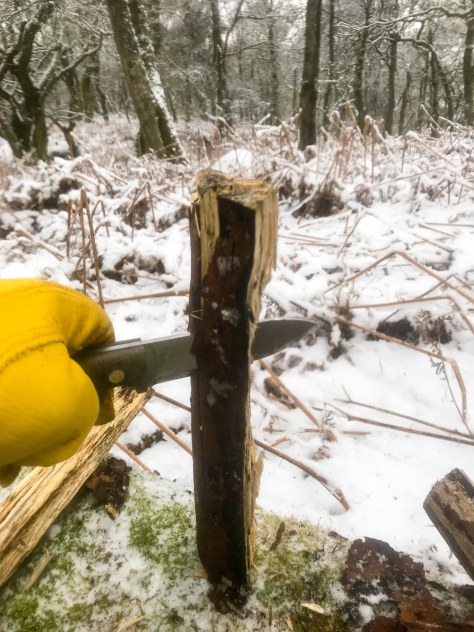 I had collected a few birch logs, my intention was split the logs to use them as a cover for the well.  Instead I split the logs with my GB Mini axe then batoned them down further.  I tried out with the feathersticks alas there were quite a few knots and parts of the log were rotten.  This combined with my poor featherstick skills meant I did manage to make something similar to a feathersticks but they weren’t going to win a prize.  The knife performed really well another thing to practice though.  I took the feather sticks and some of the loose ‘feathers’ back to the fire where only a few coals were left.  I unceremoniously dumped them on top and blew on the coals, pretty soon we were back in business with a fire.

I used some of the other split logs to continue the fire and made a brew lying on the ground next to the fire.

I was goretex’d up and on a sitmat so the wet ground wasn’t a bother.   I felt like the fire burnt better with the split logs, I put the remainder around the outside to dry as I burnt three of the split sticks.  They produced enough heat to ignite the drying sticks so they were quickly moved to the now defrosted dry ground.  I nearly fell asleep lying there it was peaceful and warm.  I had some amadou and managed to get a spark on to it with my old style firesteel and flint.  I got the spark to catch but couldn’t translate that and a pile of tinder into a flame.  I know that I need to practice the bowdrill and at the minute I feel there’s not much point doing that if I can’t get an ember to flame.

I set about breaking camp, my tarp stowing was not the best, the lightweight DD tarp is slippy and it’s hard to create tight folds.  I did what I could and it ended up with a sphere about the size of a small football wrapped in paracord.  Not ideal and something else to work on.  I would have to hang it out to dry when I got home anyway so I wasn’t too worried.  I cleaned up underneath my fire but it was mostly warm defrosted soil as opposed to hot burnt undergrowth.  Nevertheless I soaked it throughly and felt amongst it ensuring that it was fine all was good.  Casting my eye around I was satisfied there would be no lasting damage or sign to my pitch.

The walk home I was followed by a couple of buzzards and I could hear their mewing cry as I walked.  It had started to brighten up as I walked home.  The area has a number of benches along the paths with some words of Poetry on them.  I’ve always enjoyed them and I particularly like this seat and the view of Crieff. 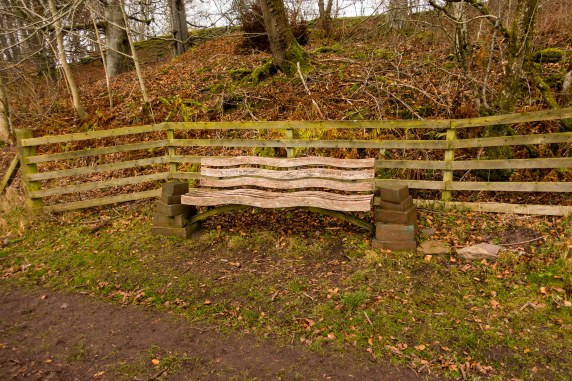 The line of poetry says “Tarry awhile, let our steps become slow, here’s Crieff to the east, And Strathearn below, with Earn winding downstream, forever in tow, Pray tell Lady Mary, where did you go? To dream of spring ‘neath Laggan snow….” 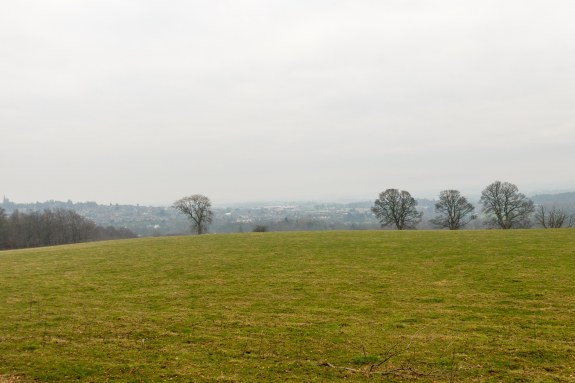 The pics were taken a few weeks ago in January, still all in all a great day out again.